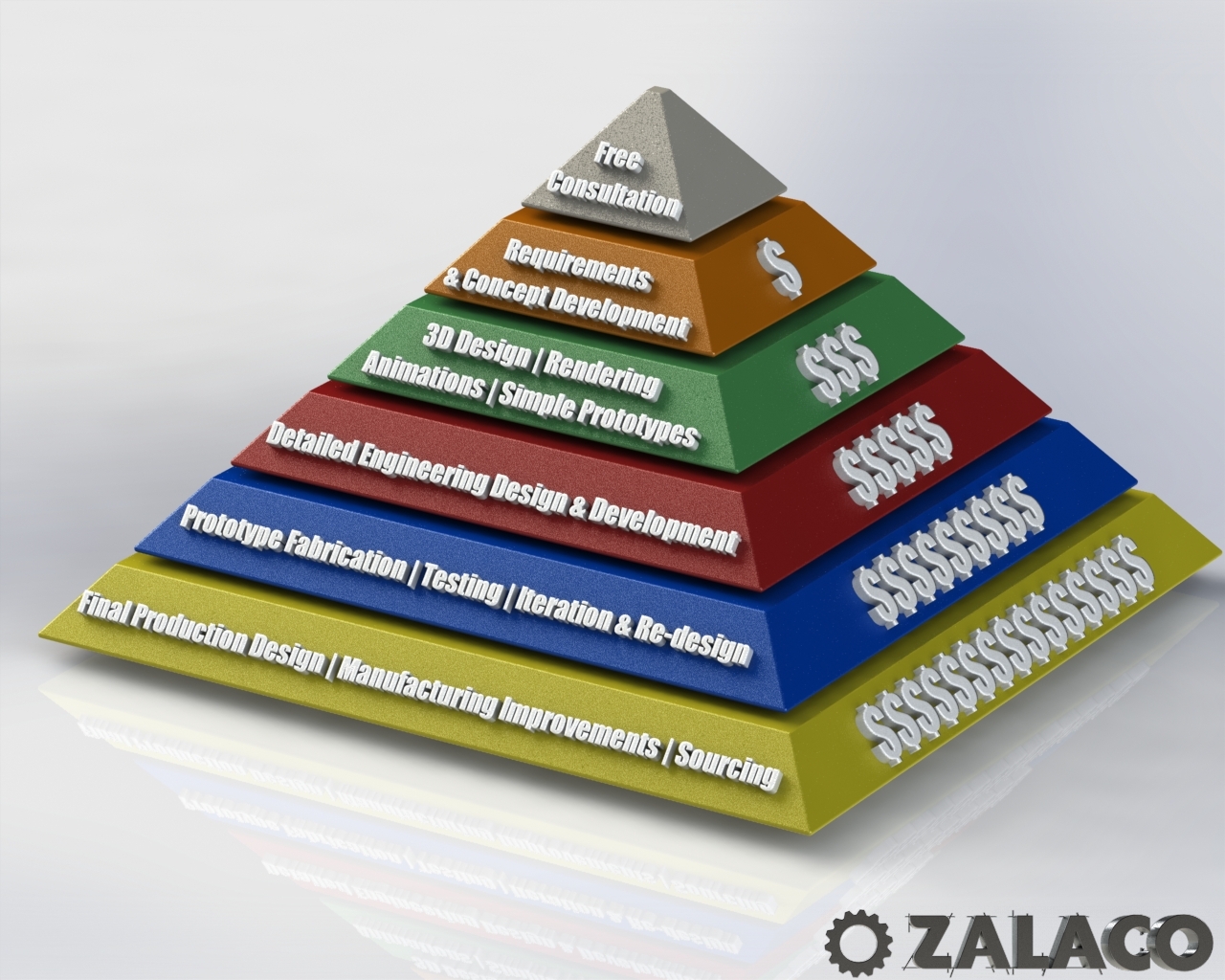 Making a profit from a product idea is incredibly challenging. How good the “idea” is matters little compared to the people making it happen. There’s no right way to develop a new product, but there are many wrong ways.  The New Product Development (NPD) process varies from industry to industry and company to company.

If this is all new to you, here’s the single most important thing to understand – the New Product Development process looks like a funnel. At the top of the funnel is every idea – no matter how useless, silly, impossible, or ridiculous. At each stage in the process, ideas fail out for various reasons. In the end, only a small percentage of ideas are converted into actual products available to potential customers, and not all of those are successful.

The costs for developing a new product is like an upside down funnel (or a pyramid). It costs almost nothing to toss an idea out there and brainstorm the concept, but with each step you take further in the process, the bigger your overall financial commitment becomes. The key is to manage risk.  Think of developing a new product like starting a business – you need some initial capital to explore and validate the idea.

If you’d like to schedule a chat to see how I can help with your project, please click here and schedule a time convenient to chat.

Developing a New Product – For Inventors

Individual inventors face a significant uphill battle. Usually, they are under-capitalized (limited cash) and inexperienced. This makes them easy targets for the various “invention promotion scams” that are out there.  Realize that (1) your idea isn’t that special and (2) it’s going to take a great deal of capital and hard work to build a business around your idea or successfully license the concept to a third party. If you go into the process with that mentality then you are off on the right foot.

I love working with inventors and fleshing out new ideas. Unfortunately, the reality is that the overwhelming majority of people will ultimately spend more money pursuing their idea than they will ever make back. My advice then is usually to limit your risk to some reasonable amount. you can’t expect to spend just several hundred bucks, but you can usually accomplish something useful with a budget of several thousand.

You can learn all about the New Product Development Process over at Wikipedia. Most product development companies will tell you about this process and how they apply it. Here’s the most important thing that you need to understand – the process is a giant funnel. For every 100 or 1,000 ideas that get poured in at the top, only a few become highly profitable products. This is the trap that inventors often fall into.

A company like Apple or Google has a constant stream of idea from really smart executives and employees. They have to screen those ideas for ones that are worth discussing further. Of the ones that get discussed, a small percentage might get moved on to be evaluated systematically. Of the ideas that are evaluated, a few might gets budgets and a staff to start developing.

At the end of the day, hundreds and hundreds of ideas are proposed for every one that makes a company a bunch of cash. Individual inventors often only have one shot. All of their resources are invested into a single idea, even though the NDP funnel clearly tells us that many will fail. This is the trap that fools so many inventors – they think that the “idea” is what sets them apart. It’s not – it’s the team you build, how well you plan, and how well you execute that plan.

Most great ideas start with a problem first. Something takes too long to do, the current options on the market do a poor job, there’s no cost effective way to perform a certain task, etc. If your product idea doesn’t solve a problem, I encourage you to move on to an idea that does! The USPTO database is littered with “inventions” that don’t actually help any one solve a problem.

Sometimes, you know there’s a problem, but you don’t know what to do about. You might be a great candidate for a Brainstorm Session. Think of this is a consulting service where you hire expert critical thinkers to propose possible solutions. No doubt you’ve heard the term “outside the box thinking” (pretty cliche right)? Sometimes that’s exactly what you need. We’ll put together a small team of problem solvers and spend a few hours focusing on ways to approach your problem. 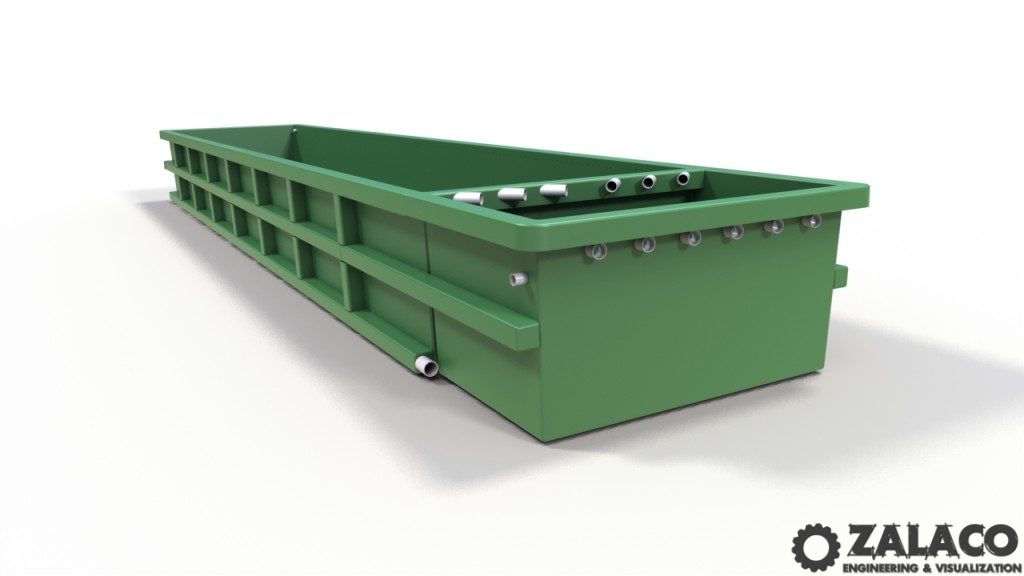 Once we know exactly what we want, we’ll generate a 3D model of your concept. Sometimes we call this a “virtual prototype” – we can’t hold it in our hands, but we can accomplish many things without incurring the expense and risk producing actual components. Depending on our goals (are we building a prototype or just some flash images to help you market the idea?) will determine the detail and effort that we need to put in. In any event, your design is created in a premier 3D design and engineering package (SolidWorks) and can be made available to you directly through your web browser.

To read more about our 3D Design and Engineering Services, click here…

In many cases, a virtual prototype isn’t enough. We want something we can hold in our hands or test for its intended function. Prototypes are often classified into two categories: (1) works-like and (2) looks-like. A “works-like” prototype is used to test the actual function of a product. A “looks-like” prototype might not actually work, but it communicates the final look and feel that we are looking for.

Going from an initial 3D concept to something ready for prototyping or manufacturing can be a significant effort. Those early concepts do not have to concern themselves with the nitty-gritty details of reality and manufacturing. Think of those concepts as the pencil sketch an artist does before painting a portrait. We have a plan in place, but the heavy lifting still lies ahead.

While 3D model files are used heavily across all types of manufacturing, engineering drawings are still used to communicate requirements beyond the nominal shape of the part. Proper tolerances to ensure parts fit together, specifying the types of material, colors, textures, and countless other details are specified on drawings. This also gives us place to properly control the revision level of a drawing and call out the file name of the associated 3D CAD file.

Click here to read more about Mechanical Drafting and Documentation

Product visualization has become a critical step in developing a new product. With a 3D model of an idea complete, we can go and generate high quality, photo-realistic rendered images. This is invaluable when attempting to communicate an idea. Ultimately, getting people on board with a new product idea is all about “selling” them on the concept. To sell effectively, you need good tools to help them understand what is being pitched.

In addition to still pictures, we can create animations showing how components work, how the product is assembled, or simply spin the product 360 degrees. These animations can be rendered to have the same high quality look of the still photos.

Click here to read more about our product visualization services…

Let’s Get Started Together

Use the form below to schedule a phone call with me. It’s quick and easy way to make sure we’re both available for a discussion. You’ll get a confirmation email as well as a reminder, then I will call you at the scheduled time.

Or Send Me an Email

Comments or questions are welcome.