We launched the Kickstarter project yesterday morning from the comfort of a Panera Bread here in Orlando. After a brief panic (the Kickstarter “Launch” button had been greyed out on the project page – fixed with a log out / log in), the project was live somewhere around 9:15am EST.

We had (obnoxiously?) emailed a large batch of our contacts the day before launch, and then again shortly thereafter. These were friends, family, past colleagues, and pretty much anyone we had connected with on LinkedIn (they make it very easy to export your email address – FYI).  We had some good success in the morning, nearing $1,000 in pledges by lunchtime. The pace slowed but new pledges kept rolling in for the rest of the day. Our day 1 total per Kickstarter was $2,028. We made it onto the first page of Popular under the Product Design category (as of this writing, we’re still there). We also showed up as a Staff Pick in the Product Design Category.

So overall, this was an OK start to the campaign. If we can average $2k in pledges per day, we’ll make our goal, but we have a long way to go. It was awesome that we made the “Popular” list, and awesome that we got picked up as a “Staff Pick.” Now we have to figure out how to ramp up the momentum and get more people involved with the project.  So far, day 2 is only on pace to 50% of what we did on day one.

So that’s today’s notes. Now on to the data. Kickstarter doesn’t provide all that much data. The only thing you can see on a day-over-day basis is the number of backers and the amount pledged. The other stats they give you, like number of video views, is just a rolling tally. They do show you where you pledges originated (from Kickstarter, from Facebook, from Twitter, etc), but not how much traffic each source created. 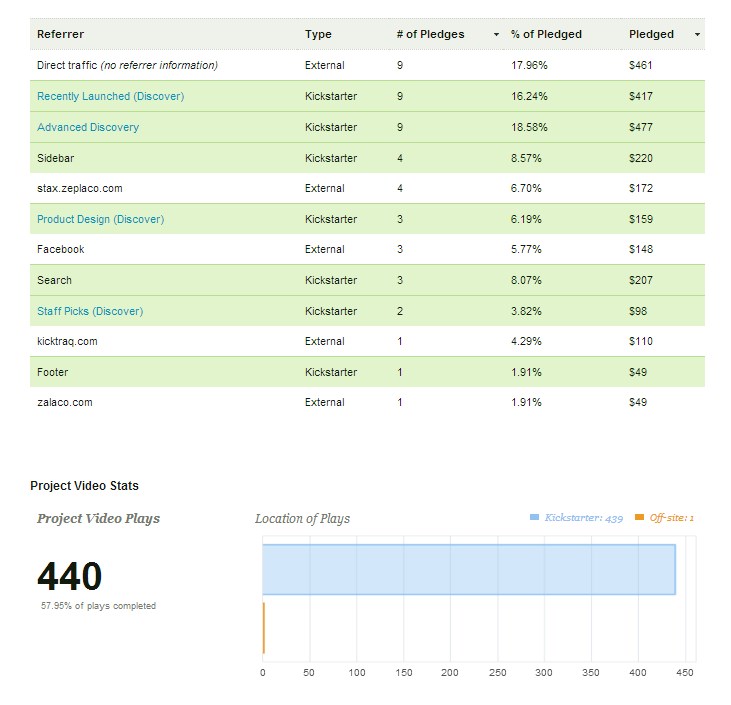